The Marriage-Saving Can Opener


I enjoy contributing to the Chicken Soup for the Soul books because of their positive messages.

Their newest release, Chicken Soup for the Soul: The Spirit of America, includes my story, "Made in America."

Here it is in its original form.

"Made in America."
(formerly titled, "Together We Can…Opener")

"Open you stupid tuna can!" I shrieked, banging it with the malfunctioning can opener.
My husband Jake raced into the kitchen to see what had turned his sweet-tempered wife into a screeching madwoman.
My eyes blazed fire--or hunger. I held out the off­ending object.

“This worthless can opener stopped working just like all the others, and it's only a few months old. I'm sick of fighting to open a can.”
Jake shot me a condescending look. “Give it here. I'll open it.”
His stance emanated confidence.

I placed the implement of evil in his outstretched palm.

He put the opener on the can and rotated the handle half a turn.
The opener slipped off and sent the can skittering across the counter.
“Hmm, I must not have gotten it on tight enough,” Jake said.
He tried again.
The can slid off the opener and plopped onto the laminate floor. Jake swooped it up with the speed of a falcon dive-bombing a mouse. 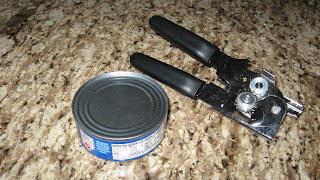 I crossed my arms and with superhuman effort restrained my, "I told you so."
Years of marriage had taught me this wasn't the appropriate time to gloat.
Besides, I still wanted my tuna.

“I hate this cheap foreign made stuff,” Jake grumbled as he battled the opener.

Each attempt resulted in the same thing: a multi-punctured can sliding across the kitchen counter in a spray of fishy water.

Like players in an air hockey match, Jake and I took turns blocking the can’s escape.


After multiple tries his jaw clenched so tightly I couldn’t tell if he was swearing under his breath or speaking in tongues.
I watched my husband do a Bruce Banner, morphing into a middle-aged version of the Hulk. "Hulk mad! Hulk can’t open tuna!"

We stood sweaty and panting in the kitchen. We’d turned can opening into an aerobic activity.

He held up the opener which was now jammed on the can.
I glared back. "It’s a name brand, just like all the others. I assumed they'd work."
Just then the can opener suddenly came undone.
The dented tuna can flew across the kitchen. Tuna water sprayed a wild arc throughout the room.

Jake threw the opener in the trash. I think I heard it laughing.

"What about my tuna?" I asked.
Jake’s jaw muscles twitched. “Go buy a better opener,” he said, wiping tuna flecks from his shirt.
I left my husband on clean-up detail and headed to the store.
In the houseware aisle utensils gleamed under the florescent lights like knights in shining armor.

Their name brand logos lured my commercial-soaked brain.
I grabbed the first can opener and flipped it over. The tiny “Made in China” letters mocked me.
I picked up the next big name brand. Sure enough, “Made in China.”
I worked my way along the offerings. All made in China.

One lone opener beckoned. I saw the price tag and muttered, “Holy mackerel, this one’s twice the price of the others.”
I lifted it and realized it weighed substantially more than its competitors.

A bold “Made in America” graced the package front, right next to the “Ten Year Warranty” guarantee.
The handle opened and closed effortlessly. The wheel mechanism glided smoother than an Olympic figure skater.

I put it in my basket and headed for the checkout when my Cheap-omiter put in its two cents worth.

An hour earlier I’d been one step away from chain-sawing a tuna can.
Now I hesitated to spend more for a better product.

A mental image formed as I vacillated in the aisle.
I pictured a father working in a U.S. can opener factory.
The factory closes because I keep buying cut-rate inferior products.
The dad can't find another job.
His wife can't support the family on her income.
They lose their home, and the children are devastated.
All dire scenarios. But at the risk of sounding unpatriotic and selfish, I still wanted to open my tuna can.

"Stop being so chintzy," I chided myself, "Buy this can opener and help that dad keep his job."
I bought the American made opener, much to my husband's delight.

Jake and I decided we'd buy American made goods to support our countrymen who were supporting their families.

Now we enjoy “Made in America" benefits.
Our higher quality products function better.
We’re helping American families.
And we can open any tuna can in the house.

Posted by Jeanie Jacobson, Writer at 8:03 PM No comments:

Email ThisBlogThis!Share to TwitterShare to FacebookShare to Pinterest
Labels: can openers, Chicken soup for the soul, The Spirit of America
Newer Posts Older Posts Home
Subscribe to: Posts (Atom)