Sometimes we need laughter to redirect our brains from the seriousness of our situations. Chicken Soup for the Soul's newest release, Read, Laugh, Repeat, had me literally laughing out loud.

My story, "What Goes Up" in included in this hilarious book. Here's a peek:

Our ten-year-old grandson scrambled up our backyard maple tree like King Kong scaling the Empire State building. He stood on a limb, grabbed the one above him, and bounced. Hapless young leaves dropped under his onslaught as the branch bobbed up and down. 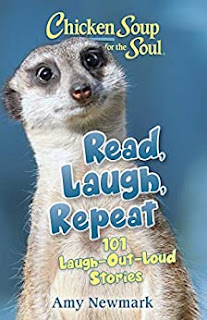 My breath caught in my throat, a regular occurrence for a grandparent of an active boy. “Asher, be careful. You haven’t broken any bones yet. Let’s keep it that way.”

He stopped bouncing and plopped onto the limb. My lungs resumed their normal rhythm. “Grandma,” he called in a cajoling tone, “Climb up with me. Please.”

I eyed the old tree. Asher and I considered it our private fortress, but the branch I normally used to boost myself up had broken off in a recent storm. Getting into that tree would take more upper arm strength than I possessed. “Honey, I don’t think I can climb up there anymore.”

Asher’s eyes widened as if I’d uttered a blasphemy. “But Grandma, it’s our special place. You have to try.” His stricken look prompted me to grab a branch. An oversized gorilla hoisting me up would have been more helpful than Asher’s verbal assistance. “Pull harder, Grandma. Boy, you should really start working out. You’re getting pretty weak.”

After multiple tries I hefted myself onto the lowest limb and lay panting against the rough bark. Slow maneuvering brought me to a sitting position.

“See Grandma, I knew you could get up here.” Asher grinned and scooted next to me. We sat together on the branch, our feet dangling. A cool May breeze held the insects at bay as Asher told me about his school day.

I silently thanked God for the opportunity to spend time with this beloved grandson. My husband Jake and I relished our time with him. We’d forged a special bond over the years with this child, so dear to our hearts.

As sunset streaked the sky the breeze died down and mosquitoes began foraging for victims. “OK Sweetie, let’s go in. Your grandpa will be home soon.”

Asher shimmied down the trunk like a competitor in a lumberjack competition. I swung my leg lower, feeling for the limb I always used to descend. “Be careful Grandma. Your climb-down branch is gone, remember?”

I surveyed the hard surface below. The new river rock and brick landscape edging mocked me. Several dismount attempts brought one conclusion. I couldn’t get myself down safely.

“Hurry up, Grandma.” Asher bounced on the patio.

“Sweetie, I’m having trouble getting down.”

Asher stopped jumping and peered up at me. “Grandma, are you stuck in the tree?”

The knobby bark bit into my protesting backside. I cautiously shifted my weight on the branch. “I don’t want you to worry, but . . .”

“Are you REALLY stuck?”

His eyes gleamed with excitement. “Can I call 911?” he asked hopefully.

Asher ran inside for the phone. A tiny gnat, the size of a pin head, landed on my arm. I jerked at its needle-jab sting, then fought to keep my balance. A red, dime-sized welt appeared where the gnat stung me. I swatted away another Mutant Robo-Gnat that was dive-bombing my face.

Asher ran back, waving the phone like a prize. “Are you sure I can’t call 911?” he asked again, anticipation written in his countenance. I could see his mental wheels turning. A firetruck or two, perhaps a rescue squad on stand-by would perk up a weekday. And make a great story at school.

“Dial your grandpa and put him on speaker,” I commanded.

I rolled my eyes and swatted another gnat.

“Grandma told me to call because she’s stuck in a tree.”

I heard a long pause before my husband asked, “Is Grandma really stuck in a tree?”

“Yeah, and she wants you to come home and help her down,” Asher enthused.

“You’re on speaker. I can hear you,” I shouted from my perch. ”Now stop cackling, come home, and get me down.”

Between bouts of laughter Jake said, “Tell Grandma to hang on. I’ll be there soon.”

“Ok, bye Gramps. I’ll take care of things until you get home.” Asher laid the house phone on the patio table and ran back inside. I smashed a Robo-Gnat attacking my leg as Asher burst through the patio door, his new cell phone in hand. “My grandmother is stuck in a tree,” he said in his best news announcer voice.

“Who are you talking to?” I asked.

Asher resumed his spiel, “My grandmother is stuck in the tree. She can’t get down. Grandma, would like to say a few words?”

The splintery wood dug into my palms. I tamped down exasperation. “Say a few words to who? Who are you talking to?”

“I’m not talking to anyone. I’m recording you. See?”

He flipped the phone around and held it up for me to view. Sure enough, a video played on-screen. A middle-aged woman wearing silver loafers, dark washed jeans, and an exasperated glare hunched in a maple.

“Give me that!” I make a feeble swipe at the upheld phone. Asher pulled it back and tapped buttons furiously. I wobbled on the branch before regaining my balance. Asher peered up at me through the deepening twilight. “Be careful! You almost fell. Grandma, are you really, truly stuck?”

My heart softened at his evident concern. “Yes Sweetie, but I’ll be all right. Don’t worry.”

“Oh, I’m not worried,” he said, “I just posted this online. The video already has two ‘likes.’ You’ve gone worldwide.”

Posted by Jeanie Jacobson, Writer at 5:23 PM No comments: